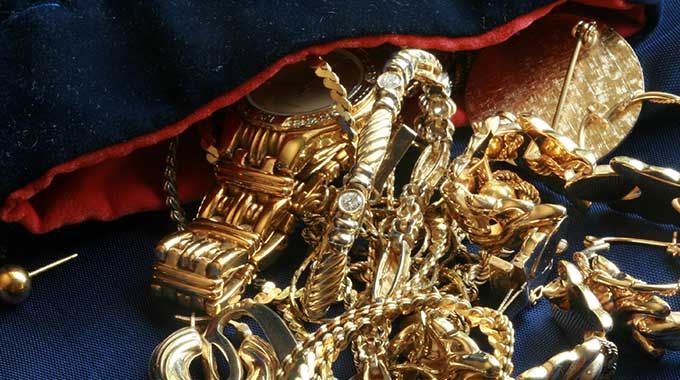 When someone brings their gold into our stores, we will sit down with them in a no-pressure environment to test the gold to give them an estimate on what it is worth. Learn how selling your gold works in this video.

Stirling:  Let’s take even one step back away from there yeah and talk about your company the one you founded and you co-own with your brother’s across Canada.  What exactly does the company do Charlie?

Charlie:  Absolutely yeah, we buy gold.  We focus on jewelry, so you know anything people have lying around their house.. we buy silver jewelry, gold jewelry and when you come into our office. We kinda sit down one-on-one with each person in kind of … you know that the no-pressure environment and will test the gold and we’ll give  an estimate on what that’s worth, and if they’re interested in selling uh… we buy it on the spot there for them.

Stirling: Interesting now, this is a very timely conversation Greg and Charlie because what just a couple of days ago spring that happened. A lot of us are well, stuck with spring cleaning job jar assignments for the next few weeks and during the course of spring cleaning over the next few weeks, more than a few of us are going to come across some thing … a bit of jewelry,  an object, may be something that was a gift maybe something goes back to your high school graduation or even further… and you’re going to go my gosh I forgot my even had this thing well now what do i deal with it maybe it’s worth something how do i go about finding out if this object I haven’t seen for twenty years and discovered at the back of that old drawer is actually worth something,  Charlie. What do I do?

Charlie: Yeah, absolutely.  We’ve got four stores in the lower mainland. We’ve got a Vancouver store on Broadway,  we’ve got one in Surrey,  one in Richmond and one in north Vancouver . So  you just kinda gather up whatever you have, you don’t have to know what it is or what you’re expecting. We can kind of let you know what it is, so you come into whatever stores no appointment necessary yoi just kind of walk in the world sit down with you and give you all the details.

Now we’re talking about gold Charlie by the ounce – of this astronomical sixteen hundred dollars but when you talk about pricing to the consumer you do it by the gram. So.  Why?

Charlie: When we see someone come in with a little bit of gold jewelry, it’s going to be point zero three – like it going to be so small, usually that point zero three s actually going to be more than that. It’s usually a more useful units and something people understand a little more easily, something people can compare I to what they know.  One gram of gold is worth between – you know if it’s ten karat gold – we do post the prices online on Vancouvergold.ca but by roughly one gram of gold; for ten karat gold is going to be worth about sixteen dollars a gram. If you get up to twenty four karat gold you’re going to be looking at over thirty dollars a gram and that depends it is worth a little bit more if it’s a coin or bullion than jewelry ’cause we don’t have to refine those.

Charlie:  but yeah i just wanted to just to give people an idea of what maybe what they can expect our average customer. We run the numbers –  look at what they come in with and it’s more than five hundred dollars people leave with and these are people often expecting that you know they have a couple of old chains.. something… they don’t know what they have, right?

Stirling: Few of us do

Stirling: But it looks like it might be worth something so it’s worth a trip to the store to find out.

Charlie: If they find a broken chain in they were going to throw it out but someone told them to you know check it out, bring it in then we get lots of referrals that way and that’s great.

Stirling: So how do we how do we can we figured grams? Not many of us have scales that are that fine give us uh… a benchmark is uh… how to recognize weight that way

Charlie:  Yeah absolutely. A Canadian quarter weighs four grams a loony weighs seven grams.. so just.. it’s not going to be perfect. We weigh it all, that’s no problem.

Stirling: I’m looking at some of the tips and this is from the website uh… Vancouvergold.ca, friends and it’s a terrific website at if you are as many of us are these days, spring cleaning or just uh… moving things around the house and come across at more than a few objects that you figure could be worth something then that’s why you’ve tuned in to the right radio program this time around because of there are now options for you to look at and uh… taking these in for appraisal at Vancouver Gold .. is a really a strong option to consider and from the website the better business bureau people Charlie, say the true price of gold may not be what you receive. If gold is worth of for round numbers sixteen hundred bucks at house and you actually managed to bring an ounce of gold tool for appraisal, you may not receive $600.00 right uh…

Charlie: That’s a great point actually. A lot of people wrongly assume that since there’s a market price of gold, no matter where they sell their gold, it doesn’t matter, that you’re going to get that price but no, no one is really paying a hundred percent. There’s some refining fees and charges basically.

Charlie: One factor is obviously the purity of the gold. If you bring in one ounce of 10 karat gold you’re not actually bringing in an ounce of pure gold prices but the other kind of more important thing to note is that you know the people who are the pawn shops.. you know you have to make sure which gold buyer you’re dealing with and there’s a huge range of what people are paying down to 20% or less is quite common – up to 80 or 90%. Our prices, we start at about 70% for jewelry .. and it goes up depending on what the items are … what the purity is – if it’s coins, it goes to the 95% or so.

Stirling: Of course. Because that has been strictly controlled right from the get-go with coins. It’s a safe reliable format.

Charlie: It’s safe and reliable. If a coin, if a Canadian Maple Leaf coin with four nines on it, that’s actually going to have a full ounce of gold in it. There’s all these other factors you know you had a ten carat gold from the eighties or before, nine point five carat is what’s actually in those pieces.

Related Posts
Why People are Selling Their Gold

How to protect yourself when selling gold

How Do I Know What It’s Worth?

It’s the question most people ask themselves before heading out to cash it in: “Will…